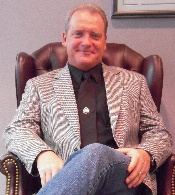 Chief Gregory A. Russell (retired) began his law enforcement career in 1981, working as an undercover drug enforcement officer for the Alaska State Troopers. Receiving a Special Commission from AST, he worked with the South-central Alaska Narcotics (SCAN) Team, making controlled purchases of illegal drugs on the Kenai Peninsula. In August, 1982, he went to work for the Soldotna Police Department as a Patrol Officer and attended the 23rd session of the Municipal Police Academy in Sitka, graduating as that class’ Salutatorian.

Greg was promoted to Sergeant in 1985 and supervised the Patrol Division. During his nearly 18 years at SPD, Greg supervised Patrol, Investigations, Property and Evidence, Training, Administrations, and was the department’s Computer Systems Administrator. He is a certified Police Instructor and held an Advanced Certificate with the Alaska Police Standards Council.

In the Spring of 1995 Greg attended the 180th Session of the FBI National Academy in Quantico, VA, taking command level courses in: Contemporary Issues for Law Enforcement; Management Planning and Budget; Forensic & Technical Services for Managers; Legal Issues for the Police Administrator; and Physical Fitness Advisors Association. He received his Bachelors Degree in 1977 and is working towards his Masters Degree in Public Administration. Additionally, he a life member of APOA (Alaska Peace Officers Association), a retired member of the FBI National Academy Associates, a life member of the Alaska Chiefs of Police Association, and a member of the International Association of Chiefs of Police.

In March, 2000 Greg and his family moved to Kotzebue, where he became the Chief of Police. His duties at the Kotzebue Police Department included managing its Regional Jail Facility, a 12-bed contract jail that was one of the most active contract jails in the state. Municipal Corrections Officers served as Dispatchers inside the department’s integrated dispatch center; answering routine calls for service and 911 emergency calls; dispatching for police, fire, EMS, search and rescue, and public works; and transporting prisoners. During his tenure at KPD, the department updated its Records Management System; gained access to the Alaska Public Safety Information Network (APSIN) and NCIC; modernized its Jail Accounting System; improved its overall efficiency at delivery of services; and dramatically improved its professional reputation throughout the community.

Life north of the Arctic Circle took a little getting used to, but it was a rewarding experience. He interacted well with the community and worked hard to promote the trusting relationship between the department and the public. Greg adopted a more “regional” approach to his job, understanding the unique interaction between the surrounding villages and this hub community of Kotzebue. In addition to other responsibilities, the Kotzebue City Council appointed him to serve as the community’s representative to the Northwest Arctic Borough’s Regional Public Safety Committee. Greg also served on the Youth Court Advisory Committee and was an active participant in the Community Circle Gatherings.

In October, 2002 Greg retired from law enforcement and moved back to Soldotna with his family, but soon found himself called back into service assisting a rural police agency rebuild itself.

Greg is a former Traveling Trainer for the Alaska Police Standards Council, a contract Instructor Trainer for Skid Car System, Inc., a Board Member of the Peninsula Crime Stopper Program, and is a frequent speaker at conferences and special events.